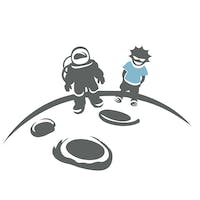 Quite often a Python project consists not only of an app but also of some libraries that could also be used by other projects.

This post shows, how you can manage this setup with Git X-Modules.

For the Git server, we will use Atlassian Bitbucket Server/Data Center --- one of the most popular self-hosting Git solutions. It's also convenient because there's a special Git X-Modules App for it. If you are on any other Git Server, you may still use Git X-Modules as a command-line tool.

The configuration. As an example, we'll create an app (let's call it 'qsolver') that solves quadratic equations. I will also create a library ('qsolverlib) that performs mathematical calculations, so the 'qsolver' app will use it to output the solution.

Finally, there will be a 'qsolver-project' containing both components. This will help us to pinpoint the version of 'qsolverlib' used by 'qsolver' because otherwise 'qsolver' would use 'qsolverlib' installed on the system that could be of the wrong version. This is especially useful in real life when some problem happens to some older version of the application and it's important to deduce the library version used for that application. 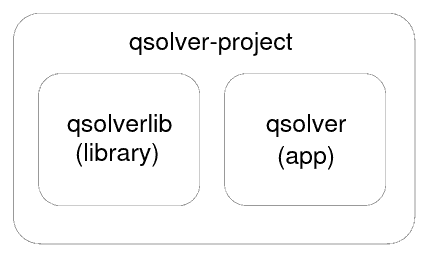 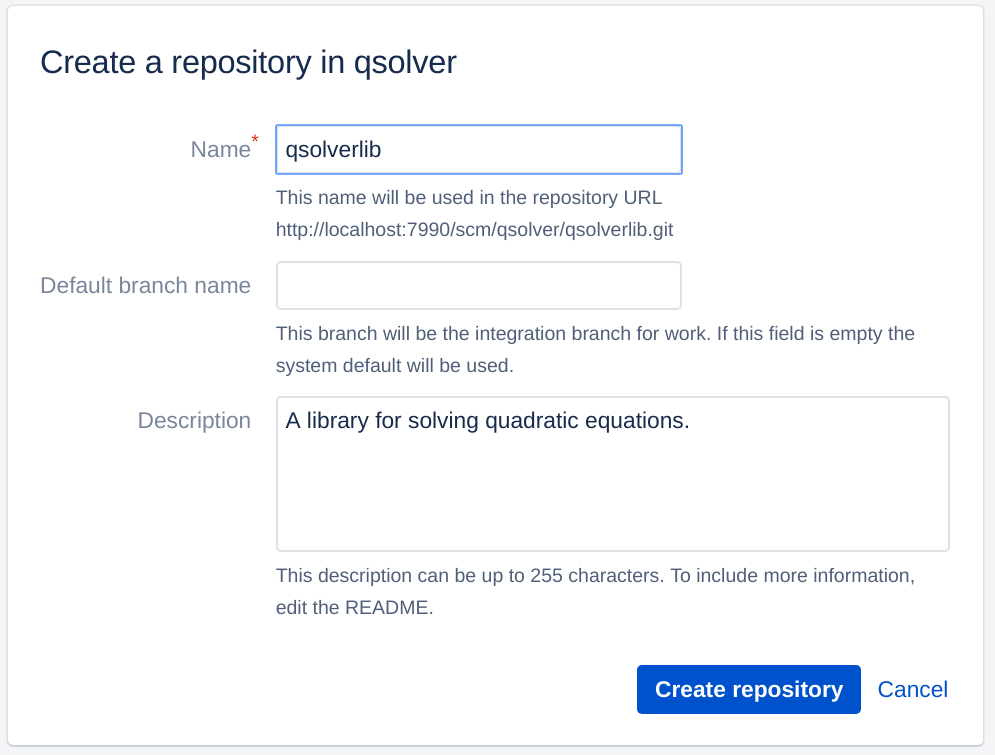 Inside this Git repository create the 'qsolverlib' subdirectory and create the solve.py file in it with the following content:

Also create an empty "__init__.py" file in the "qsolverlib" subdirectory:

Finally, create "setup.py" at the root of the Git repository:

So the resulting structure looks as follows:

Commit and push the package. 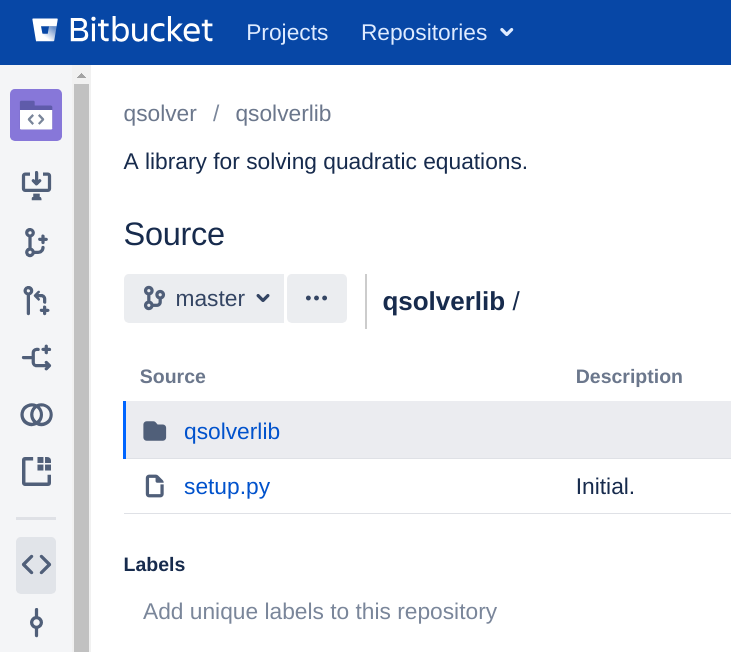 Step 2. Create Python virtual environment and install the package there.

Python virtual environment allows installing python packages locally into some directory without requiring to install them at the system-wide level. To create the environment run (not inside the Git repository but inside it parent directory):

As result, the ".venv/" directory will be created. This environment should be activated to be used:

After that "(.venv)" will be prepended to the command prompt indicating that we're working with the virtual environment.

Now install the 'qsolverlib' package into this environment:

For me it prints:

This can be resolved by installing the 'wheel' package:

is successful. Now the library can be used by an app if the app is running within the same virtual environment.

The virtual environment can be de-activated with 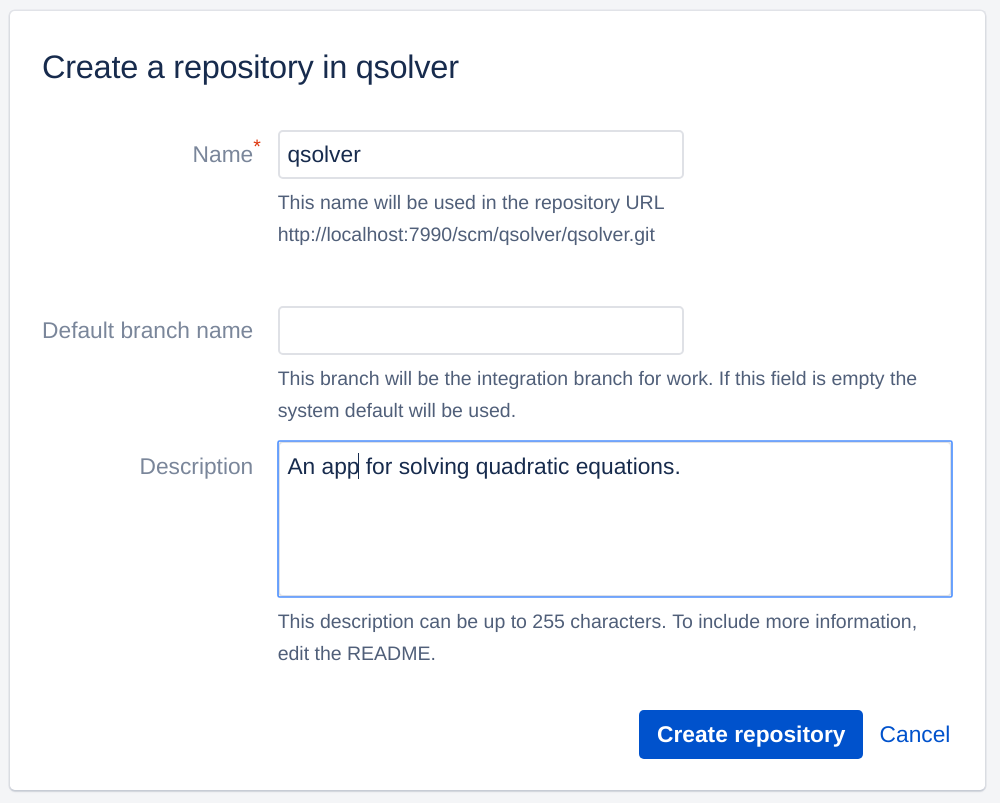 Commit and push this file:

Check that the app works:

If we now want to change the "solve()" function, we have to edit solve.py in the 'qsolverlib' repository, install the package, and only then test how it works in app.py in 'qsolver'. This is too inconvenient. "Develop mode" is the solution.

It logically links qsolverlib installed in the virtual environment with the sources of 'qsolverlib', so any changes to 'qsolverlib' sources become effective for the app immediately.

Step 5. Create a parent project to pinpoint versions of 'qsolverlib' and 'qsolver'. 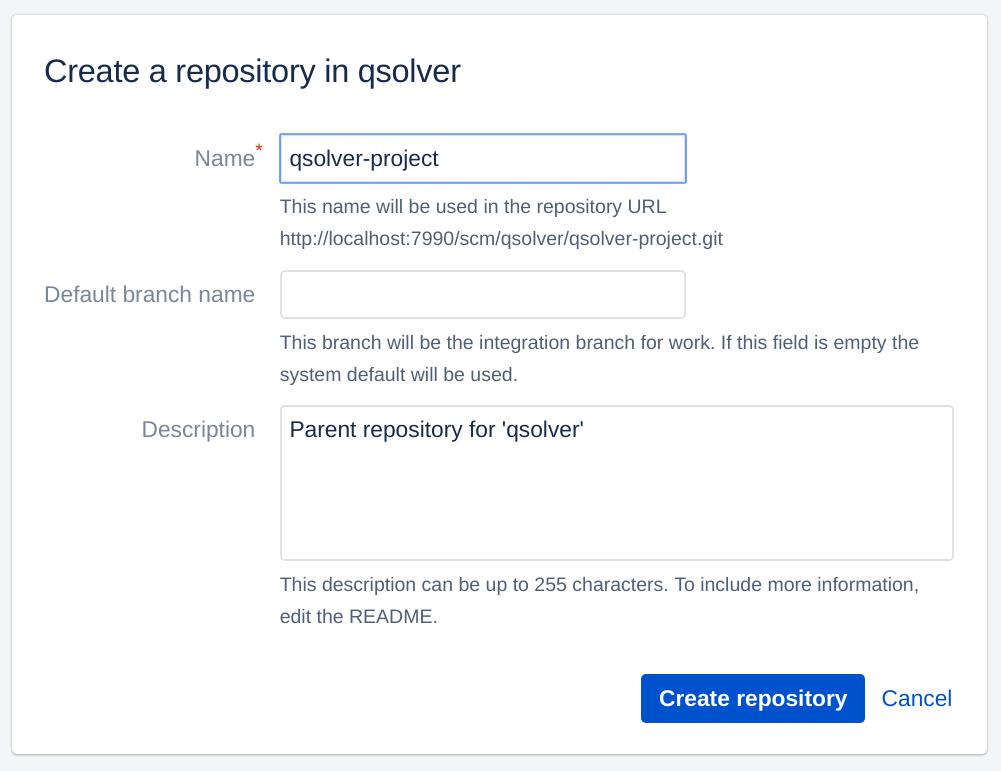 Now we will use Git X-Modules, make sure you have it installed. To do that, go to Administration | Find new apps | Search theMarketplace and type "X-Modules".

Go to the 'qsolver-project' repository page on Bitbucket. As the app is now installed, there's an X-Modules button, click it.

The repository is empty, so click "Create Default Branch" to create the "master" branch.

Click "Add Module" to add 'qsolverlib' as the first module.

Choose the 'qsolverlib' repository and the master branch. 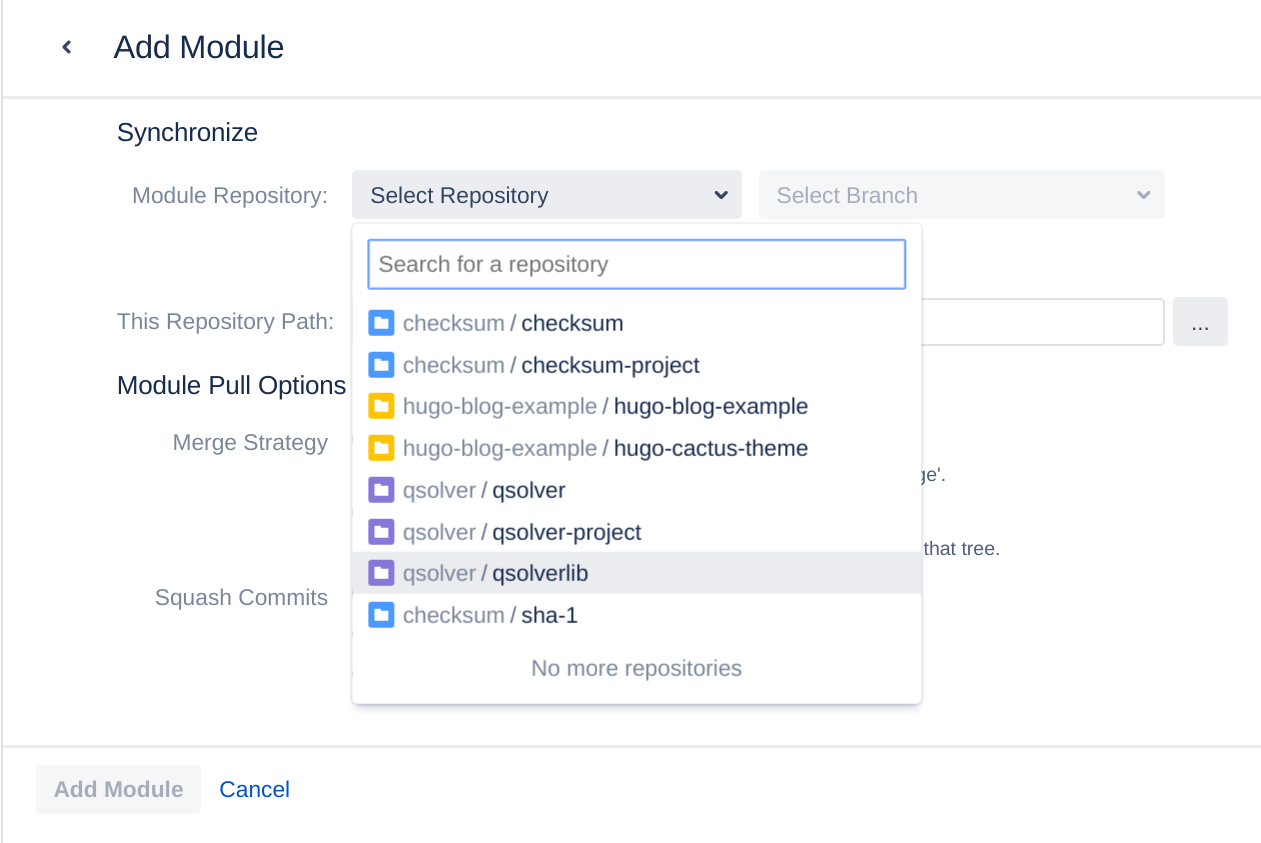 Make sure "This Repository Path" is 'qsolverlib'. It's a path for the insertion point of the 'qsolverlib' module. Click "Add Module". 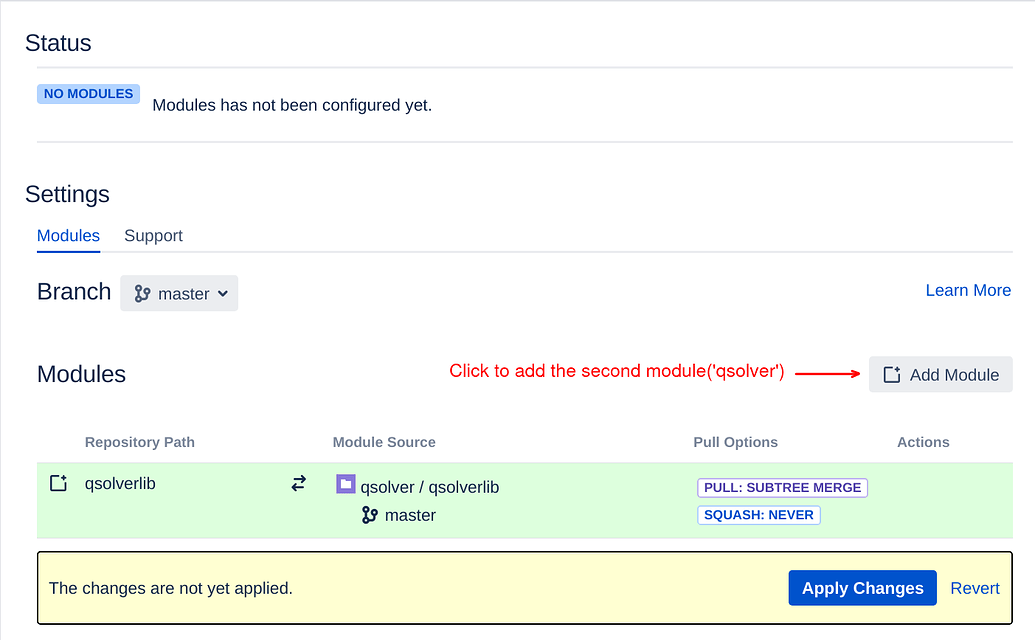 Instead of applying changes immediately click "Add Module" again, to add the second module (for the app).

Choose the 'qsolver' repository and the master branch. 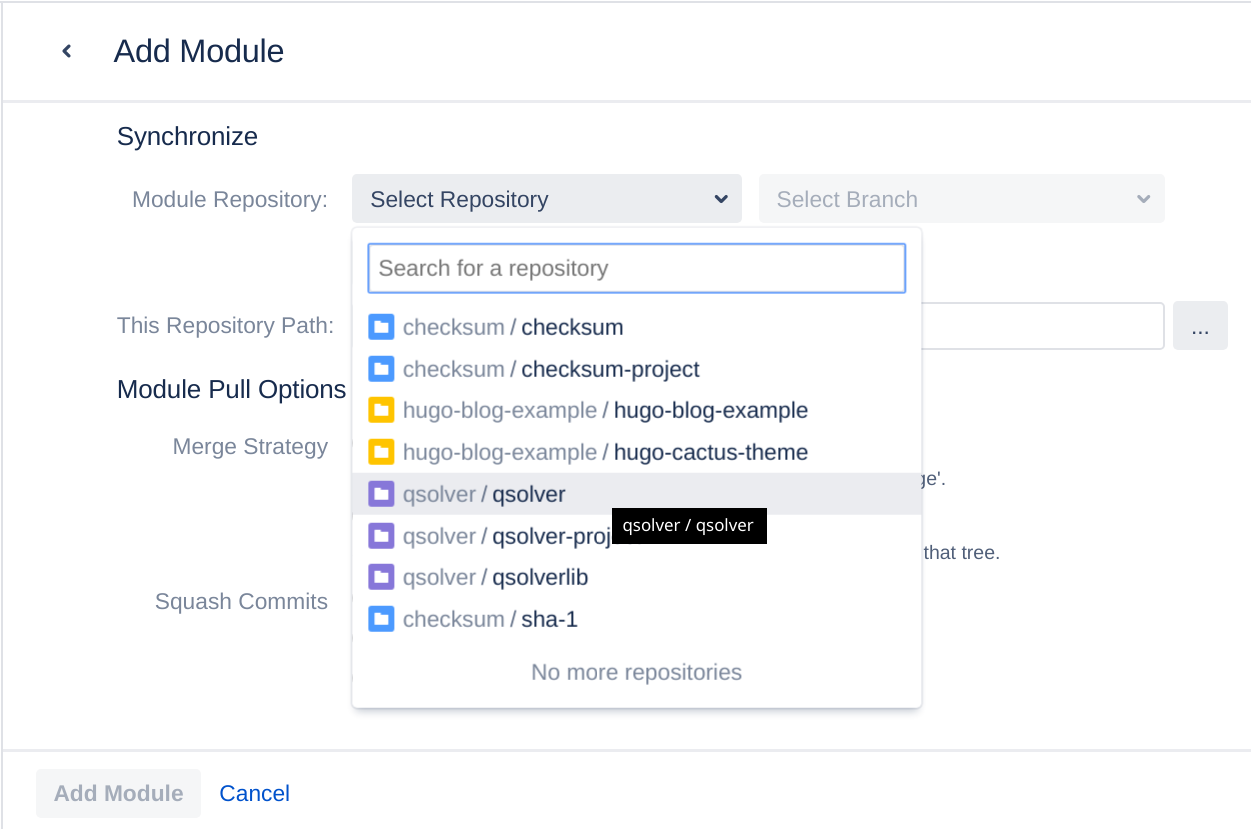 Make sure "This Repository Path" is 'qsolver'. Again, this is a path for the insertion point of the 'qsolver' module. 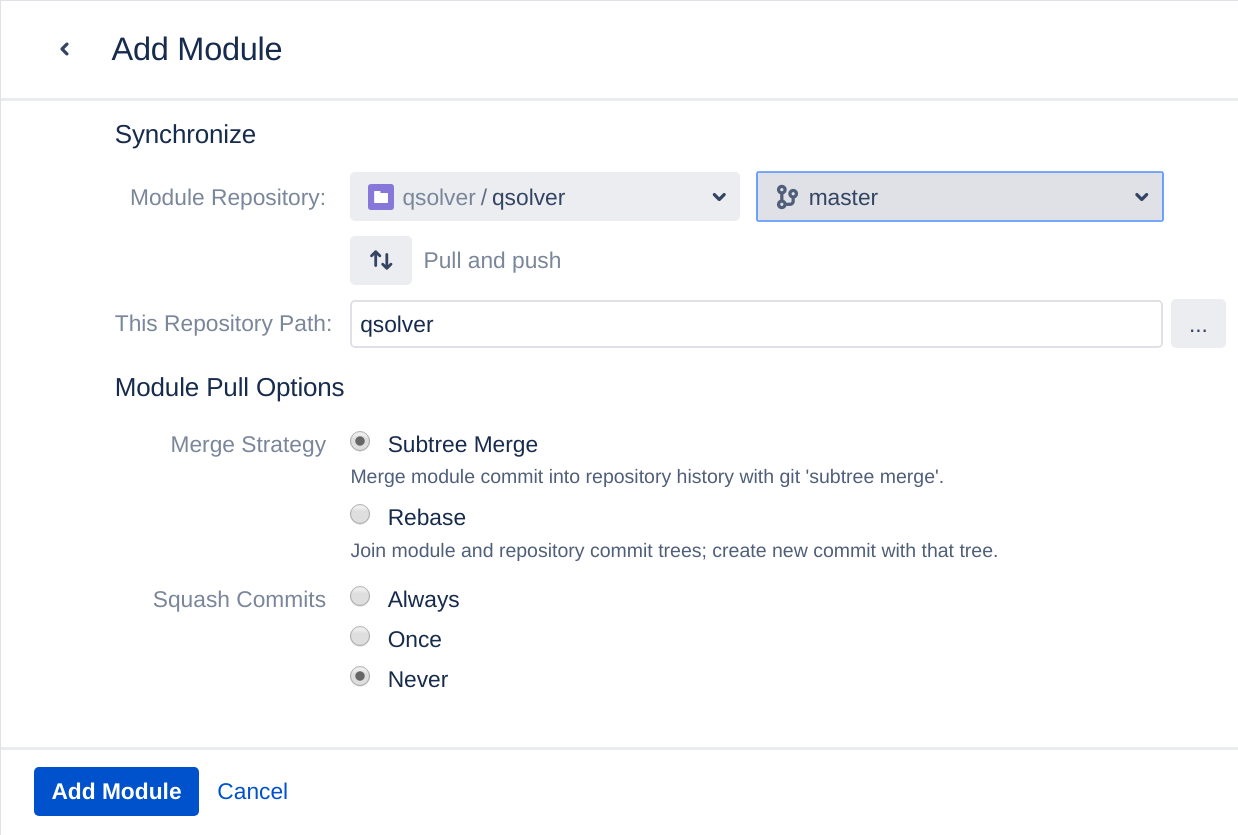 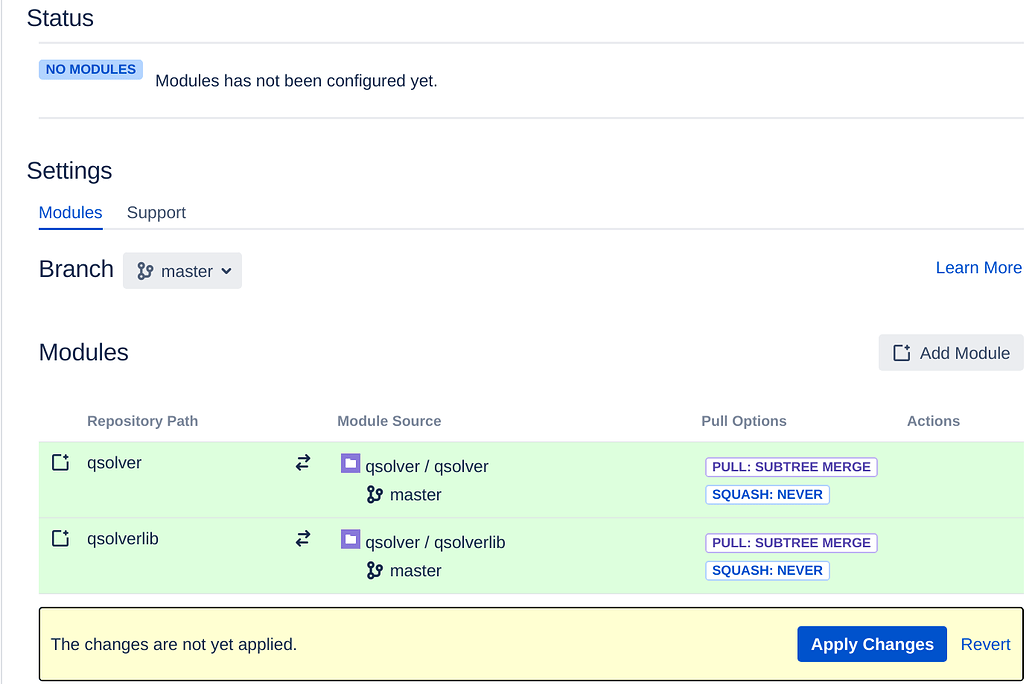 Now 'qsolver-project' repository contains both 'qsolverlib' and 'qsolver' X-Modules. These are regular Git directories that are synchronized with the corresponding repositories. 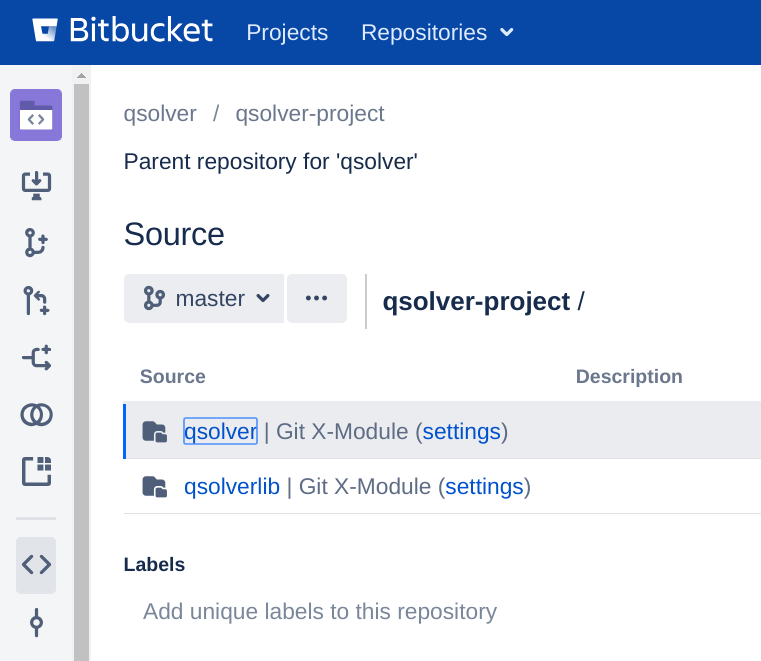 So now one can clone the 'qsolver-project' repository and both 'qsolverlib' and 'qsolver' components will be there.

Suppose you have a new colleague who wants to start working on both 'qsolverlib' and 'qsolver' as soon as possible. For this purpose, we will create a "create-virtualenv.sh" script that would set up the development environment.

The current structure of 'qsolver-project' is:

It already contains 'qsolverlib' and 'qsolver' components, so one doesn't need to clone them separately.

Add, commit, and push this script:

So now for a new colleague, it will be enough to clone 'qsolver-project' and run this script to start working on the project:

Step 7. An example: make a change to 'qsolverlib'.

Now let's improve our solve() function to handle the case a=0, i.e. to solve bx+c=0 equation. 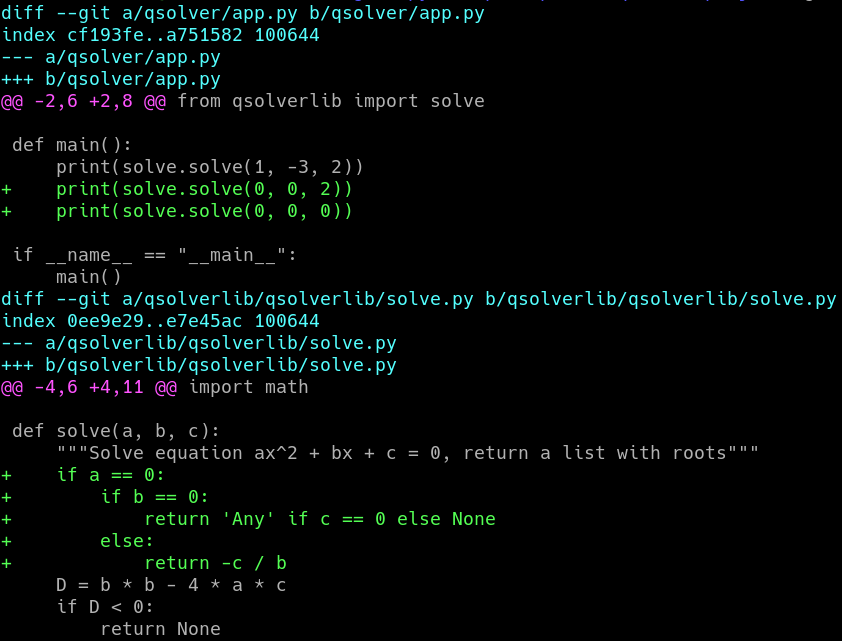 Commit and push the changes with to both 'qsolverlib' and 'qsolver' as a single commit in 'qsolver-project'.

Now you can look at 'qsolverlib' and 'qsolver' histories on Bitbucket: they are updated!